MASTERS:
3. David Feldberg – struggled for the first couple of rounds but after a strong push, made it to the finals and finished third (only one shot from second place).
5. JohnE McCray – came out strong the first three rounds, despite battling Lyme Disease flare ups for the last couple of weeks. Finished 5th after nearly making it to the final four showdown.
8. Patrick Brown – started slow but showed character and got better and better as the tournament went on. His semifinal -11 was the hot round and got him to a 8th place finish.
30. Scott Reek – played solid disc golf with 5 of 6 rounds well above his rating.

Divisional Doubles
The Pro Masters World Champions started with Divisional Doubles and Team David Feldberg/JohnE McCray (aka DavE McCrayberg) put the pedal to the metal and after two hot rounds (-31 in total) they were crowned champions, 15 shots ahead of second place finishers D.J Ellis/Shasta Criss.
Check out the coverage from Divisional Doubles at The Disc Golf Guy > 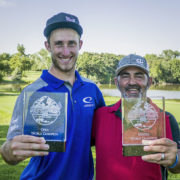 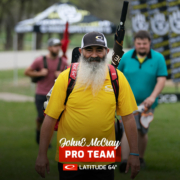 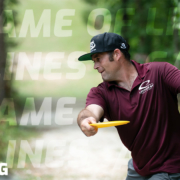 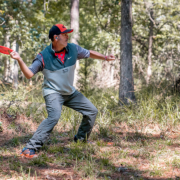