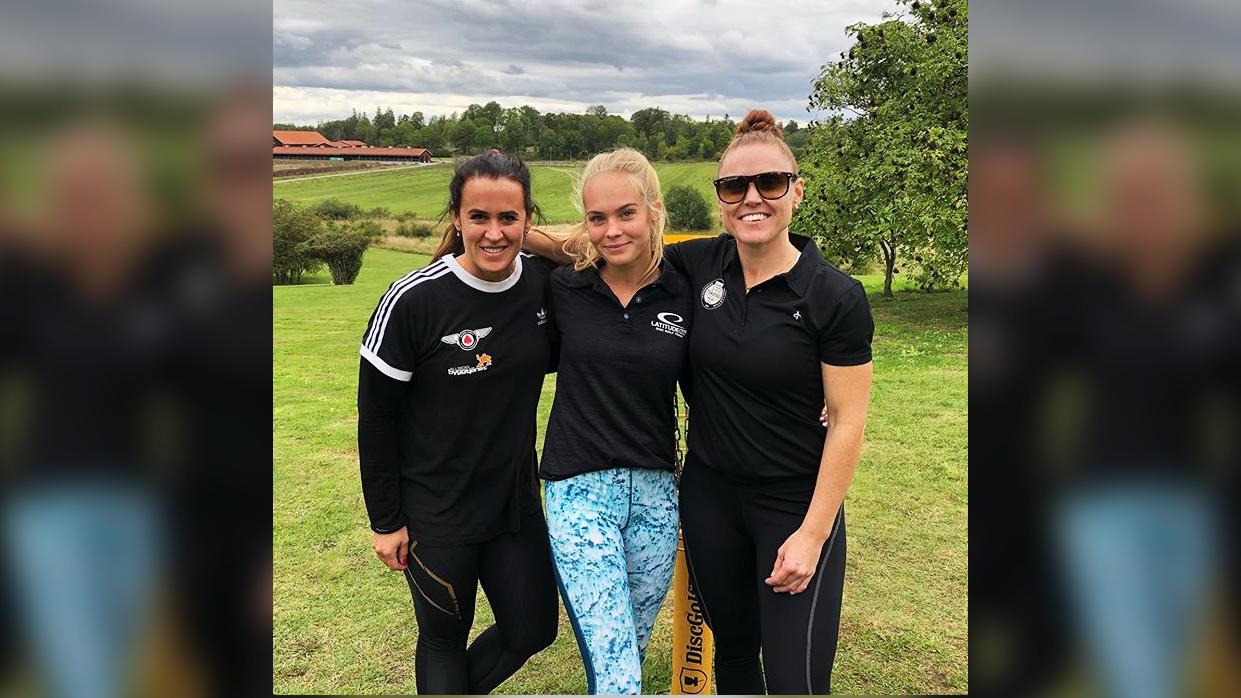 Matilda Ringbom (in the middle) wins her first A-tier in the Open Women division.

Matilda Ringbom wins the Stockholm Disc Golf Open. This 16 year old talent has challenged the more experienced players in the Open Women division for some time now. Back in August she won the silver medal at the Swedish Championships. At that time Sofie Björlycke won with a margin of 15 shots. But when the National Tour Finale in Stockholm was held the 7-8 September it was Matilda’s time to climb to the top of the podium. We reached out to Matilda to hear about the event, her future goals and what discs she throws the most.

You just won your first A-tier in the Open Women division. How do you feel?

You came in to the last round tied for the lead with Sofie Björlycke, and was still tied after 18 holes. What went through your head for the final round and the play-off?

– I was both nervous and motivated coming in to the final round. Once we started playing I got more comfortable though. I had great support and that meant a lot to me. Coming in to the play-off I felt confident as I was happy with my game during the final round, and I was so happy when I won it!

What does it mean to you to beat the best players in Sweden in a National Tour event?

– That’s one of the biggest events to win in Sweden besides the Swedish Championships. It’s definitely a milestone in my disc golf career and means a lot to me.

What aspects of your disc golf game have you improved the most during this season?

– My putting has seen the biggest improvement. I feel a lot more confident inside the circle now. I also think I am a smarter disc golfer, I can make a mature game plan and are making better choices on the course.

– I want to play the biggest events in the US, but most importantly I want to have fun and meet wonderful people.

Which discs was most important for you this event?

– My Tournament Giant was my most used disc. It flies far, straight and I can always count on the late fade. And my Lucid Maverick, having a trusty understable fairway driver is important to my game. My Opto Compass was perfect for those straight 70-80 meters (230-260 feet) shots. When it comes to inside the circle I have my Zero Soft Pure. It’s been in my bag forever. I use if for all my putts, and also for some flippy putter shots. Everyone should have a Pure, Matilda says.