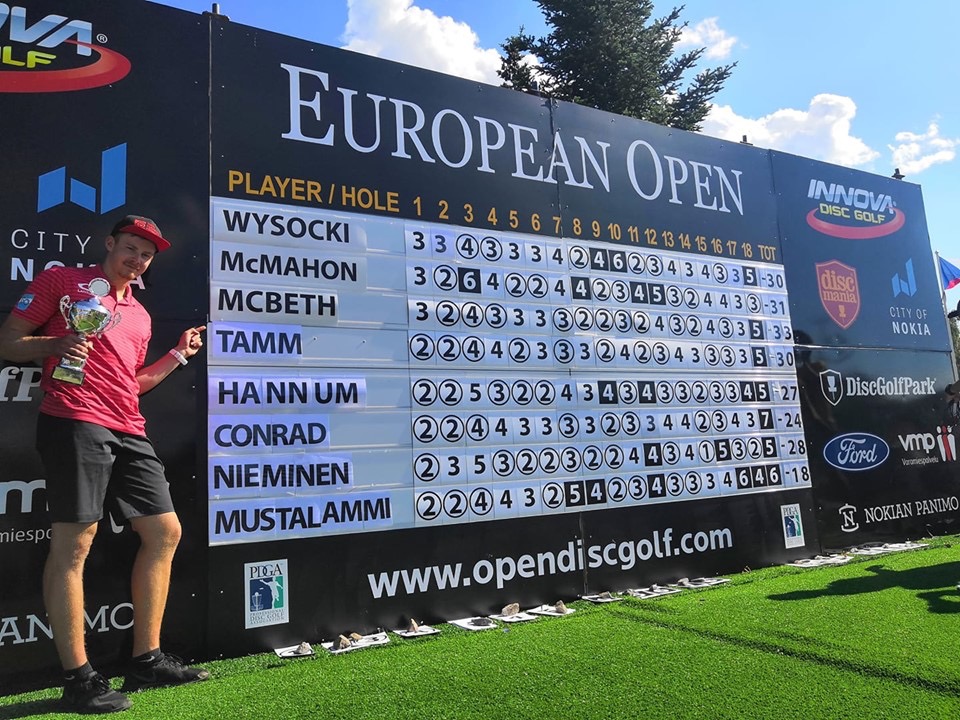 The European Open is over and this Major brought us some thrilling moments. Albert Tamm on Team 64 played the best disc golf of his career (so far) with earned him a spot in the lead card for the final round. Surrounded by former his former idols, now rivals, and one of the biggest galleries in disc golf history he played world class disc golf. His performance (1042 rating in average) earned him his first podium finish in a Major. We had a short talk with Albert to hear about his week in Tampere, Finland.

Congrats on the podium finish at European Open. How do you feel?
“Thank you! I feel great”, Albert says.

It’s not easy to perform at this level, especially during a Major over four rounds. Where you expecting a performance like this?
“My goal was to hit top 20. Instead I found myself in front of the biggest gallery in disc golf. I couldn’t imagine that coming into this tournament.”

What was your game plan at “The Beast” and how did you execute it?

“The was simple – stay in bounds, hit the lines and give yourself looks inside the circle. I mostly handled it pretty well but I still managed to have fun in woods and on the putting green as well.”

How was it to play in the lead card for the final round alongside World Champions and a huge gallery? And how did you tackle it?
“It was fun. When then gallery started clapping, that was something different for sure. I handled this new experience by just realizing that my card mates are probably feeling the same nerves as I do, if not even more. And by that point my tournament had exceeded my expectations in every imaginable way, being on a lead card was just a bonus.”

Which discs was most important for the European Open?

Vip Ahti. Main workhorse for controlled placement shots. Could count on their stability. For example hole 16 was just Ahti all the way for me.

Fuzion Enforcer. My go-to distance driver didn’t let me down in these windy conditions at the Beast.

We also saw Norway’s Øyvind Jarnes from Team 64 with a top 20 finish. With a solid -19 for the event he finished at 18th place.

In the Open Women division no one could catch Dynamic Discs Paige Pierce. Kristin Tattar on Team 64 didn’t get the performance she wanted but fought well and finished in 5th place.

… and if you’re up for coverage from the final round with Albert Tamm, it’s right here:

Rebecca Cox at the podium in Portland